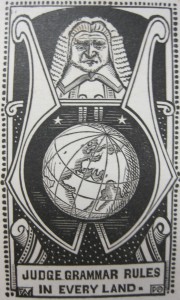 “The language of our country is certainly more interesting to us than any other. To be able to speak and write it correctly is of great utility in every station of life; especially in a free government, where men of every class ought to be capable of executing those public offices in which their fellow citizens may have occasion to place them. The grammar of this language, therefore, is an object which claims our first attention.” – Alexander Miller, A Concise Grammar of the English Language (1795)

For Alexander Miller, writing his textbook in the aftermath of the American Revolution and the establishment of the United States Constitution, enthusiasm for the subject of grammar coincides with an enthusiasm for democracy. But the American interest in grammar began even before this, as the early settlers inherited a rich tradition of Latin grammatical instruction from England—primarily from the texts of William Lily. Although he died in 1522, Lily’s writings continued to dominate the teaching of Latin and grammar in England for two-and-a-half centuries afterwards. His approach to the subject found a strong foothold in early America via educators like Ezekiel Cheever.

Although Latin remained a major academic subject in schools and universities, English grammar became an increasingly prominent topic of study. In New York in the late 18th century, Pennsylvania native Lindley Murray produced his authoritative English Grammar which became the most popular and influential grammar and writing textbook in 19th-century America, and was also widely influential in other English-speaking countries.

In the 19th century, instruction in grammar gradually came to include more explicit instruction in the art of effective and persuasive writing. In 1872, Harvard University introduced a compulsory composition course for all undergraduates, a policy that was soon taken up by colleges and universities all over the United States, including the University of Alabama. This period also saw a greater effort than ever before to make the principles of English grammar and composition appealing and interesting to children, and some grammar books began to incorporate entertaining stories, amusing illustrations, and various activities designed to engage the imagination of young readers.

Unfortunately for those who share the views of Alexander Miller, the teaching of grammar suffered a major decline in the 20th century. Yet in recent years, the subject seems to be enjoying renewed attention, with many popular books and websites devoted to English grammar and writing. We may be heading for a time in which public opinion affirms that grammar “is an object which claims our first attention.”